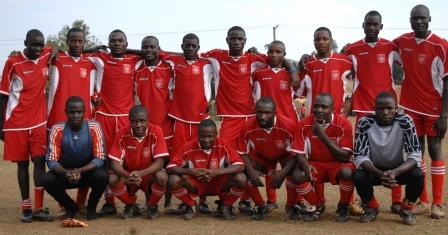 On Friday 30th of August 2013, Don Bosco Football club outwitted Buwaate Football Club in the ongoing Kira Champions League Tournament at Kira play ground. The long awaited match of the day kicked off at 4:30pm amidst the cheering crowds of spectators of both teams. Don Bosco F.C. started off at a steady pace and after 15 minutes into the game, Julius Piriot put the ball straight into the net after a poor ball clearance from the defenders of Buwaate F.C. hence putting Don Bosco F.C. into the driving seat. Both teams created several chances throughout the first half but failed to capitalize on them

.However in the second half of the game, Don Bosco Football Club produced a scintillating game of football which tormented their opponents who conceded 2 more goals – one from Kayiwa Richard and the other from Nsubuga Moses in the 56th and 60th minutes. As a result, tempers began to flame up resulting in one of the players of Buwaate Football Club to be sent off the pitch after a second booking. Don Bosco F.C. enjoyed most of the possession in the second half but failed to convert many chances for more goals. Finally, the referee blew the final whistle and Don Bosco F.C. convincingly won the match by 3:0. Thanks for goals from Julius, Richard and Moses as well as the good performance from the entire team supported cheering fans.