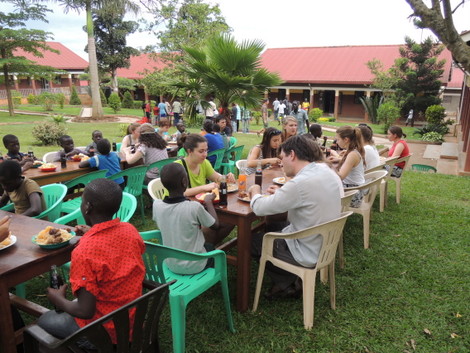 An experience that changes your life cannot be expressed in words

An experience that changes your life cannot be expressed in words. But with the help of pictures, and sharing of stories, I hope to portray the truly remarkable experience that I will cherish forever, and has left an everlasting imprint on my soul. It all started with flying halfway around the world to understand a life that my grandfather once lived, and continue to carry with him. 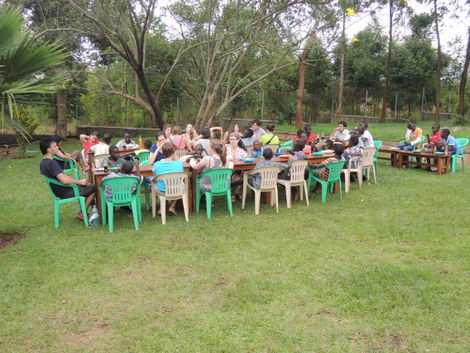 Bronek Szolopiak, whom we call “Papa”, has seven grandchildren.  Five of us – Joseph, James, Danielle, Ryan and me, Sarah – were blessed with the opportunity to accompany him to the Polish Refugee Reunion in Uganda in November 2012.  The experience was enlightening, exciting, and emotional, and far surpassed all of our expectations.  With this book, I hope to express how powerful, and life changing, this trip was to all of us.

The Don Bosco Children and Life Mission (CALM) in the town of Kiira hosted us for almost three weeks. The moment we arrived, Father Richard made us feel welcome and relaxed with his witty sense of humor and big heart. Our first surprise was how beautiful the grounds were of this orphanage, which is the home to over two hundred boys.  The next great surprise was to meet the history students and Professors from the University of Krakow, who had come to interview our Papa and his contemporaries.  These students have been studying and archiving the story of the Eastern Poles who were invaded during the second world war by Stalin’s Soviet Union.  Thousands of Polish families were taken captive into Siberia in February of 1939, where they were treated inhumanely, and it wasn’t until two years later when Stalin and Churchill formed an alliance against Hitler, that the Poles were released from the bitter cold of Siberian torture.  The Poles were sent to Eastern Africa in 1942, where they were welcomed with open arms and the love of the Africans. 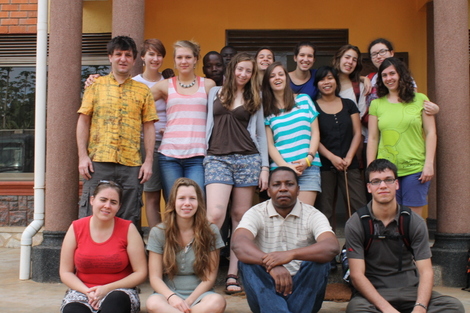 During the time when the professors and student’s interviewed our Papa, the five of us cousins went on our first Ugandan adventure with our new Australian friends, who were there with their father, also a Polish refugee.  Joseph, who is one of the “uncles” working at the Orphanage, kindly, took us on the most exciting tour of a city any of us have ever walked – the city of Kampala.  People were jammed on the sidewalks, coming and going.  The cars, taxis, and motorbikes were moving so quickly that we weren’t even sure how to cross the road.  “MUZUNGU, MUZUNGU” being yelled from different directions made us feel uneasy at first but became a word we were very familiar with as the days went on.

Being hosted by the Don Bosco Mission gave us a chance to get to know many of the boys, who call this orphanage, and the staff who work there, home.  Angella and Juliana fed us home cooked meals everyday. Chaz drove us everywhere. Joseph led us through the sites of Kampala. Sister Maria kept Father Richard in line. Father Jean Marie made us laugh. Foska orchestrated the music and of course Father Richard kept us safe.

Visiting Koja and Masindi, which were once the villages of the Polish Refugees, was an excursion of great celebration.  There were tents, food and drinks, Polish Government Officials giving speeches, a marching band, acrobats, children dancing, singing, and praying.  Edward Wakiku, the farmer who found a run down cemetery twelve years ago and helped restore it back to its respected state, organized much of the festivities.  The celebration put on in both villages was to welcome back the Poles who lived there in refuge from 1942 until 1950.  Emotions ran high as the children sang and we watched our Papa walk through the Polish cemetery.  It was that moment that it really set in that we were standing on the land and in the country that saved our grandfather’s life.

He said to us “If I did not live in Canada, this is where I would live.”  We never realized this was his home away from home. It was the lush soils and big hearts of Uganda that offered our grandfather, his family, and seven thousands other Polish refugees a life of hope with education, full tummies and a warm bed at night.

The rest of our time in Uganda was spent in other exciting ways such as:  standing in the Northern and Southern Hemisphere simultaneously, visiting local schools, negotiating in the markets (very poorly I may add), listening to the choirs of children sing at Mass, white water rafting up the Nile, boating out to Chimpanzee Island, watching in awe how the cultural dancers move as if they have no bones (as our papa would say), and playing with the boys of Don Bosco CALM.

The boys were a lesson in themselves.  They had no intension of teaching us anything.  They were just being boys: running, playing, joking, studying, and praying.  But for us, they were the perfect example of what is most important in life and what we lose sight of so often in our western society.  They have a roof over their head, a comfy bunk bed to snuggle into at night, and three home cooked meals a day.  They are raised to excel in school, and then continue on to college or university afterwards to earn a career that will provide a better life for themselves than that which they were born into.  These are the simple things we tend to take for granted in our busy schedules.  But beyond all of those basic values the most important thing that the boys of Don Bosco CALM reminded us of is that they have their faith and they have each other.  That is the constant in their lives that brings a smile to their face, and the encouragement to excel through each day.  It is the constant that takes all of us through ups and downs, tough times and prosperous times, and should never be taken for granted.

Thank you to the boys of Don Bosco CALM for being a true example of excellent character and for your big smiles, which we will never forget. Thank you to the people of Koja and Masindi for welcoming us with such excitement and for taking care of the land, the cemeteries, and church that are the lasting memories of the Poles.  Thank you to Edward Wakiku for caring about run down cemetery you found twelve years ago.  Thank you to the students and professors of the University of Krakow for dedicating your studies to capturing the truths of the Polish people during World War II and for helping to restore the run down cemetery. Thank you to all of the staff of Don Bosco CALM for opening your hearts to us, for feeding us, for showing us your country, and for making us feel so very welcome.  Last but certainly not least, thank you to Father Richard for hosting us and showing us what Uganda is made of – big smiles and big hearts.