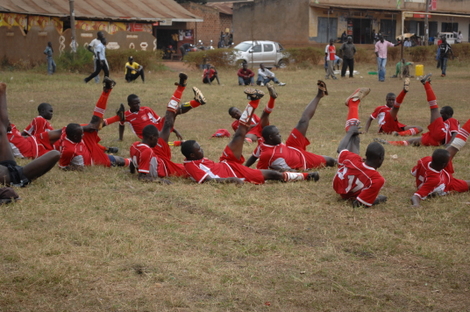 Oh! For that Bungled Penalty Stroke!!

The game took off at 5.00 pm – 30 minutes late – not unusual for Uganda. Mzee Bro. Robert Dias was there to witness this game on Kira Town grounds from start to finish. My trip was made possible courtesy Fr Jean- Marie Mushibwe.The first half saw both keepers tested. At one moment our keeper Silver made a brilliant save as the ball was dipping into the net. Both teams were testing their football strength.

Our defence stood their ground. Joseph Nyenere, a veteran player of many marches, was impassible rand a tower of strength. Our boys proved to be the better headers than their opponents.

The second-half began with no score for either side. The game resumed on a brisk note. Both sides played attacking football. And then the moment came. Don Bosco F.C. was awarded a penalty stroke in the 75th minute. Oh! what a glorious chance. Emmanuel Katumba on his own took the penalty stroke. His feeble kick was saved. What a gasp! How could this ever happen! And how could he bungle such a glorious chance! That did dampen our spirits not a little.

And so ended the game in a draw.

Kudos to the referee who had the game well in control, notwithstanding the absent of linesmen.Don Bosco have two games left to win the coveted prize – a big, fat-cow!!

The game continued with both goal-areas being visited.

We did have better chances but our forwards were goal-sky in the box.