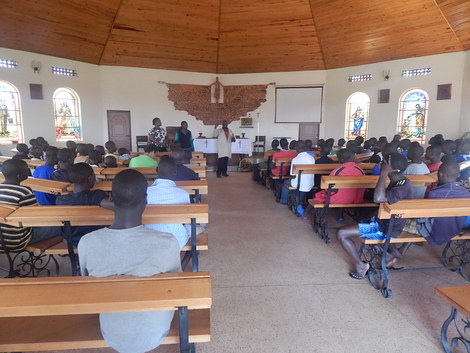 Be safety conscious: don’t not walk by

To day we hard privilege of being visited by officials from Uganda Electricity Transmission Board. We received three officers by the names: Aheebwa dorcas, Ssebunya Wilson, Namugalu Deborah. This was on their community sensitization on the dangers of their product. In the attendance were 101 boys, these were the ones who were at home others hard gone to school.They begun by thanking the management for accepting them to come to sensitize the boys. They said so many people know the advantage of their product; light and the ability to run house hold and other appliances, among others. Forgetting to know the dangers which course damage and lose of lives.

He explains further, ‘electricity is very dangerous, it can kill. Avoid by all means to come close to wires which are bare, fallen from the pole, the trees which are in contact with the wires, bare sockets, among others.’ He further said, ‘avoid walking bellow fallen wires for they may be caring power of high voltage and do not jump over it .’ he further warned the boys to avoid the risk of wanting to find out whether power is or not on the wires. He also said electricity transmitted very first in the water and so during rain and there are fallen wires, no one should get any closer there.