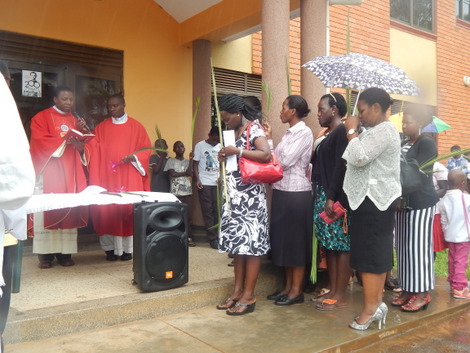 It was a beautiful Sunday morning of 28th March 2015, the last Sunday of the month and last Sunday to Easter celebrations, a day on which the Catholic Church happened to celebrate the Palm Sunday all over the world. At Don-Bosco CALM, the morning weather seemed to be cold but was later accompanied by drizzling weather. The place always celebrates two Masses; one with Makerere College students who are neighbors and the other with the fellow Christians in the neighborhood. The day proceeded smoothly as noted below. At around 6:45am, students from Makerere started arriving for the mass and by the time it clocked 7:00, the mass had already begun with a procession from outside imitating the receiving of Jesus by the Israelite in Jerusalem as their king with the waving of Palms with great joy and happiness. They later marched to the church to celebrate their mass with Rev.FR. Jean Marie  as the main celebrant. Beautiful songs accompanied the instruments like the piano; guitars and the jazz band were sung sweetly in Angelic voices. 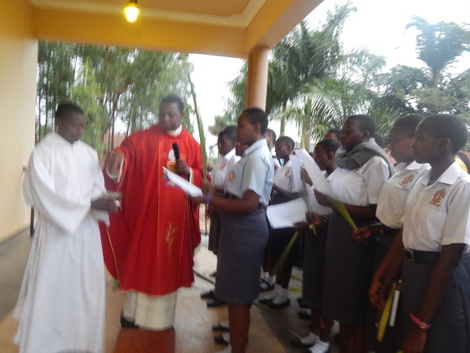 By 8:45am, the first Mass came to an end but the drizzling weather had already started. Therefore the students had to bear with the costs of moving in the rain back to their school campus.

At exactly 9:00am, the second mass also started with a procession Jesus’ entrance into Jerusalem and being welcomed by the Israelites with palms as their king. The drizzle by then had reached its climax but most amusingly, Christians bore the weather with courage and braveness to withstand the weather condition at that moment. Indeed it was not surprising that the Christians during the waving of the palms waved with happiness and joy signaling that they has got adapted to the drizzling weather. Rev. Fr. Jean Marie in this mass was also the main celebrant being assisted by Rev. Fr. John Bosco. The congregation later on marched to the chapel while waving and shaking the palms. The choir, mainly comprised of the boys led the rest of the Christians in the singing during the mass. Beautiful songs like “Hear Our Prayer” by Don Moen were sung by the choir in sweet, soft, Angelic voices with a lot of vigor. The most amazing part of the mass was the Gospel reading; this time round it was presented in drama by the boys who had been organized the fathers and Uncle Henry who are in charge of liturgy. Just to give you a hint on what was presented was the eating of the last supper, the betrayal and arrest of Jesus Christ, his scourging at the pillar, his condemnation by Pontius Pilate and finally his death on the cross at Golgotha. The drama was great, joyful and entertaining especially in the arrest of Jesus whereby many Christians were left in lots of laughter but at the same time the drama was touching that it portrayed Jesus’ love to us all by accepting to undergo such grief and severe suffering up to the point of being nailed to the cross. The drama was later on accompanied with the wonderful preaching from the main celebrant. At exactly 11:00am, the mass came to an end and by this time the drizzling has stopped hence Christians were able to get back to their homes immediately after mass.

After mass, the boys had their breakfast and later on went to play different games and sports like volleyball and football. Entertainment activities like watching television and listening to music also went on.

With all the above experience throughout the day, the Palm Sunday came out to be great, joyful and entertaining mainly because of the activities mentioned above that took place. In any way you can not object to it being a colorful day in its own way.

Uganda Namugngo Parish gives back to its Youths