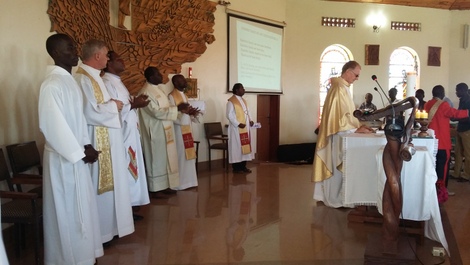 By 9:30Am, all our boys were ready in the mood of the cerebration. The Band  welcomed all our visitors and this was followed by Praise and Worship led by Namungongo boys in preparation of a talk by Fr.Arasu on vocations in the church and in the salesians of St.Don Bosco since this was also a day for Salesian vocations and missionary day.

Since we are called to serve emulating St.Don Bosco’s way of life, Fr.Arasu in one of his talks about Youth Ministry and Holiness said, “ministering to young people or rather ‘serving God in the young’ becomes a path to holiness when we believe that God is awaiting us in the young to offer us the grace of meeting with Him and to dispose us to serve Him in them, recognizing their dignity and educating them to the fullness of life. This is the Incarnation Principle, God the Father’s own vision of sending his Son into the world, ‘so that we may not perish but may have eternal life.’ This consists in recognizing in the young that, ‘The Kingdom of God belongs to such as these’. Youth Ministry is truly the incarnation model of God becoming one of us”.In his conclusion about the joy of the Gospel, he said,   “If we have received the love which restores meaning to our lives, how can we fail to share that love with others – to the young?”

The Eucharistic Celebration of mass was presided over by our Beloved Fr. Provincial who was the main celebrant since he was on his visit to Uganda. He emphasised the spirit of service following St. Dominic’s way of life especially to the young.

Lunch was served to all our visitors and the boys were also served to their expectations in line with the cerebrations. This was followed by Entertainment from the boys till evening and departure was at own leisure.

A vote of thanks to all who made the success of this day a reality and to all those who actively participated in every event of the day.