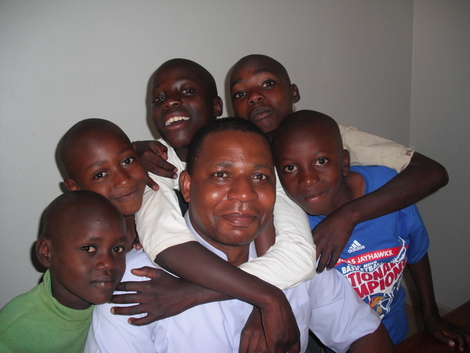 It was on Saturday the 27th/08/2016, that the Salesian community of Don Bosco Namugongo CALM organized a colorful and fantastic party, to extend its gratitude to Rev. Fr. John Mary Mushibwe for the wonderful services he has been rendering to the community for a period of six years, and at the same time saying bye to him, as he looks forward to attend to his new appointment in Bujumbura-Burundi.

The party began in the afternoon with the arrival of different invited guests, and these included: Salesians from different communities of AGL, Christians around the community, past pupils of CALM, the staff of Don Bosco primary school, The social workers of CALM, volunteers from Poland, and finally Don Bosco CALM boys who were too, the chief organizers.

The program started with the welcoming of the chief guest Rev. Fr. Mushibwe and this was done by Don Bosco CALM brass band, the Uganda national anthem came next, followed by the opening prayer led by Rev. Fr. Elie( the incoming Rector of namugongo community), then entertainments (classic music, modern dance, comedy, acrobatics, brass band) and these were intertwined with different speeches (i.e. from the head boy of CALM-Kasule Dan, The head teacher of Don Bosco primary school-Mr. Ochom Sebastian, the Christian representative, past pupil representative, a speech from the incoming Rector-Fr. Elie and from the outgoing Rector-Fr. Mushibwe). Super proceeded and then later some few minutes of a dance the chief guest himself began.

The party had over 250 participants and it took place within the compound of Don Bosco CALM. Kasule Dan(s.6) headed the organizing committee, Wasswa Moses(s.4) headed the team of the receptionists, Mugabi Johnson(s.4) was the MC of the day, Kilembwe Brian(p.7) and aunt Nassanga Agnes(social worker) led the kitchen department, Br. John Baptist sdb was for decoration, Mubiru Andrew(p.7) was on the sound system together with DJ Amio(p.6), Opio Steven(s.3) led the table serving team, Mukasa Willian(s.2) headed those of acrobatics and Ntale micheal(s.4) was the band master.

The following day on Sunday 28th/08/2016, Fr. John Mary celebrated the thanks giving mass for all that the Lord has granted him within the period of 11 years that he has spent in Uganda, he insisted on the value of being humble and the need for forgiveness.

Toward 7:00pm, Fr. John Mary said Bye Bye to the entire community (confreres, social workers, past pupils, students from makerere college, some Christians, teachers) that had gathered and he set off for Kampala where he was to meet the means that had been organized to insure his safe arrival to his new community.

May the good Lord be with fr. Mushibwe wherever he will be working, and may He keep and guide the newly appointed Rector Fr. Elie in his new mission.