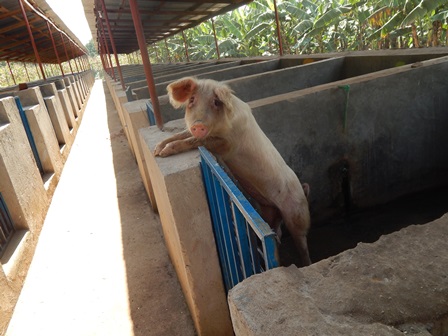 A well constructed sty that shelters over 70 pigs

Walking through the Farm in the early morning, I decided to visit the piggery and what I found was really surprising. Before this, I knew all the pigs were fond of making noise and eating but it was the opposite on this farm, I found the pigs resting in their clean respective rooms. This caught my attention and I asked Emmanuel, one of the workers why everything was the way I was seeing it and he told me, “These animals know when feeding time comes, they can’t make noise until that time comes”. Well if it was this way, then I wished all animals were trained in this same manner.

As time passed on, all the pigs stood up and began making noise; I just thought that they had now realized they were hungry. The animal feeds were already prepared and they began serving each of them. Each room was equipped with water supply pipes were the pigs could eat and drink until they dined to their fill. It was now my time to know the number of the pigs; I tried my best to count but am not good at figures so one of the workers helped with their figures, “there are 93 pigs”, he said with a confident voice. “Four of them are pregnant and soon giving birth, I know the details on each of these animals”, he continued. So the numbers were now hitting a hundred in next months to come.

I continued interviewing him, asking different questions that he respondent to very well. He told me how the pigs are well fed, how they are treated and immunized in case of any breaking pig disease. Emma continued to tell me how it was a rarity to hear that an animal had died on this farm. It was really amazing seeing all this, but many other amazing things were found on the farm. In the next write-up we are shall bring to you other animals and birds in this farm. We shall particularly write about each type of bird and animal separately. We thank all those contributing to the well-being of these animals more especially the workers who make sure that these animals are fed and treated in a clean environment. It will be great joy for the place when this number hits a hundred and more. 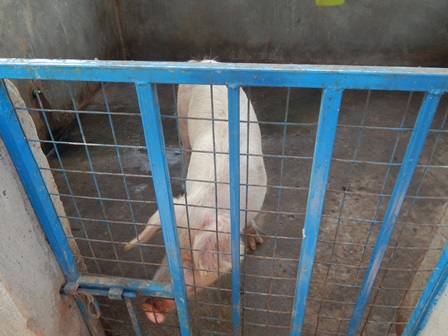 A clean and nice looking room with water supply.

CORPUS CHRISTI: THE BODY AND BLOOD OF JESUS