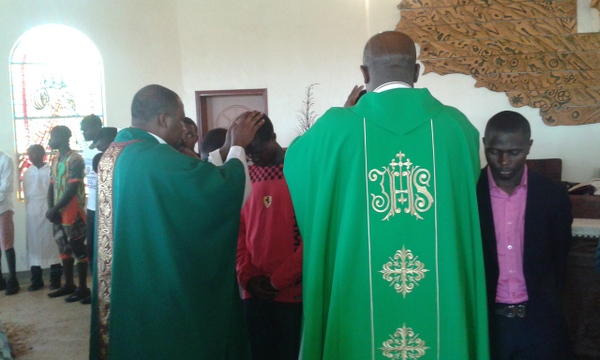 It was on Sunday 11th .10.2015 that we prayed for the candidates to wish them God’s blessings and success in their upcoming final exams. All our boys attended the Eucharistic celebration of Mass to pray and wish as well their brothers in candidate classes success in their finals. After the thanks giving song, our Rector Fr. Jean Marie Mushibwe called upon the candidates to come forward for the blessing ceremony. He called out the senior six candidates who are six in number followed by senior four candidates who are three in number and then the primary seven candidates who are twelve in number. All smartly dressed, came forward and the Holy Spirit song was intoned by the choir and all the Christians stood up and raised their right hands to pray for the Holy Spirit to descend upon them and be with them during their Exams. Blessed water was then sprinkled to every candidate who was followed by laying hands on them while another version of the Holy Spirit song was being sung. Our Rector then blessed them all and wished them success in their Exams. The senior six candidates will start on 9th November   primary seven on 2rd November while the senior four candidates start on 12th November. Success and God’s blessing to all of them.