This is Don Bosco CALM Namugongo calling why this Title:  oh give thanks to the Lord for he is good. Yes: The conference of Don Bosco CAIM have every reason to say so: It is mid December 2015 and we were planning ahead our Christmas celebrations and the year2015/2016 El Nino rains are on- Well: on22 Dec 2015 a Sunday at 1:45am a little after mid- night disaster struck Salesian residence of Don Bosco CALM as well also the newly constructed DON Bosco primary school Namugongo.

Unexpectedly and from nowhere a storm was brewing up and while we were lost in slumber, disaster struck our campus. The storm was fierce with roaming winds and our two buildings took the impact. Some iron sheets roofing the new Don Bosco Primary School were also blown away and landed at Don Bosco CALM some 200 metres away. 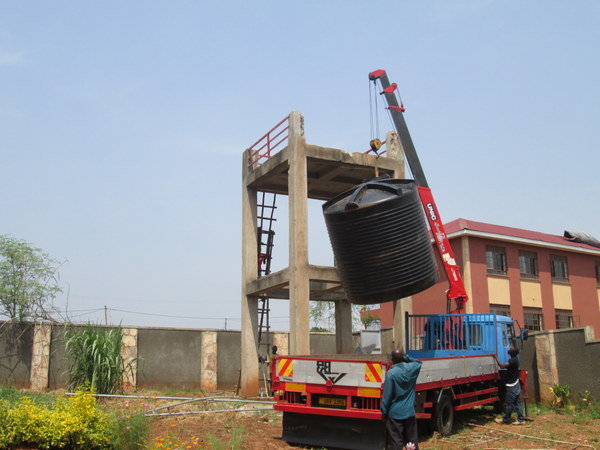 The overhead tank- capacity 10000 litres perched on the top of an erected structure was thrown down one hundred metres to the ground and split into two- Salesian Residence of Don Bosco CALM also had its share. The room on the ground floor where Br Robert Dias resides got the brunt of the storm.   A deafening thunder bolt and a blinding flash of lightning hit the one of the windows panes. The glass sheet bullet proof was reduced to smith –er- reen. Br Robert was rudely awoken and did not dare to move. He was in shivers.

The rector Fr Jean Marie mushibwe took courage, got up, and at 2:30 am in heavy rain moved around with his flash-light to see what happened. He was dumb- struck for the moment. We, the Salesian conferes- were up for Sunday mass at 9:00am. No running water in our rooms, iron sheets that were blown off from the roof – top of Don Bosco primary school were lying at our entrance.  Br Robert’s room was flooded with rain water that came in through the gaping hole of the window. Fr Jean Marie immediately took pictures of the disaster that befell us and flashed them off to procure de missiones Salesians- 2008 Madrid Spain requesting for emergence help. In a jiffy Madrid responded “YES”.The monies arrived – it was Christmas and New year time. Holidays for firms and workers. It took 18 days to restore normalcy and have once again running water in our rooms.